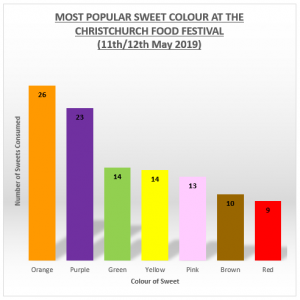 We wanted to have some fun and find out which colour food was more appetising. (any excuse for some chocolate!)

Here are the results of our ExperiTent:  Which colours are most appetising? activity.

Orange and purple were the most popular colours. Brown and red were the least popular.

Many people believed that the orange sweet ‘tasted’ of orange (official Smarties do contain a small amount of orange oil added to their outer shells however the sweets we used had no added orange oil).

Some believed they could ‘taste’ other flavours that are associated with the colour (such as banana and raspberry).

Because the colours were all from natural additives some didn’t appear to be very appetising (with the exception of the orange and purple); the brown appeared to be a tan colour and the red were more of a brown colour, which could have put people off choosing these. Plus,  the strong sunshine faded the pink ones!

Next time – we’ll use real smarties 🙂